The Canadian oil sands are an enormous reserve of non-conventional oil. Because of the high oil price, the difficult extraction process has become economically viable. Energy companies, including Royal Dutch Shell, are investing billions of dollars. The regional economy is overheating – and opponents point to environmental damage.

By Frank Kuin in Calgary

In the remote north of the Canadian prairie province of Alberta, hundreds of kilometers from Edmonton and Calgary, oil companies from Canada and abroad are engaged in a race for one of the world’s largest and challenging oil reserves. Here, in a vast landscape of forests and lakes, giant open pit mines and belching industrial plants, energy company Shell is digging its way to oil that is among the hardest on earth to extract.

In Shell’s open pit mine, giant excavators deposit loads of tar-like black ore into towering dump trucks. Via the world’s longest conveyor belt, the crushed ore is transported to giant industrial centrifuges, where rocks are removed and the substance is washed of sand with warm water. 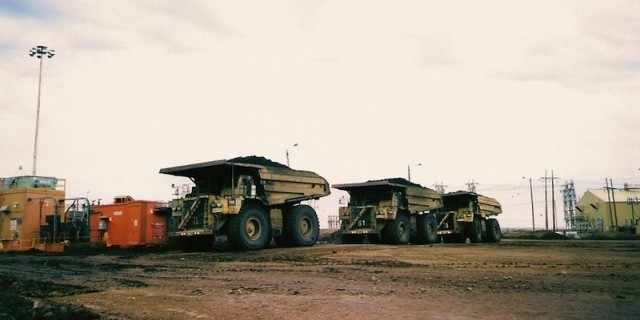 Giant dump trucks are used in the extraction process of bitumen from open pit mines.

What remains after several cycles is bitumen, a very viscous type of heavy crude. In diluted form, it is transported by pipeline to an upgrader in Edmonton. After processing into heavy oil, it flows to a refinery, where Shell turns it into light synthetic crude.

It is a non-conventional way of extracting oil, acknowledges Clive Mather, CEO of Shell Canada, a British petroleum veteran with 37 years of experience in the oil industry in the U.K., the Netherlands, South Africa and Brunei.

“Never in my career have I been involved in oil extraction from a mine,” he says at Shell Canada’s head office in Calgary, Alberta. “This is quite different from drilling for oil in Saudi Arabia or in the North Sea.’

But, he predicts, oil sands will become a normal source of crude in the coming decades. “Because of their size, the ever-growing demand for oil and high oil prices.” (Jump to: ‘Soon, it will be normal’)

“This is quite different from drilling for oil in Saudi Arabia”

Shell Canada is among the world’s frontrunners in this type of oil production. The Canadian subsidiary of the Anglo-Dutch major (Royal Dutch Shell controls 78 per cent of Shell Canada) has a 60 per cent stake in the Athabasca Oil Sands Project, one of three mining operations in Alberta’s Athabasca region where tar sands deposits are being exploited (Shell Canada’s partners are ChevronTexaco and Western Oil Sands, each with a 20 per cent stake). Two other mega mines, operated by the Canadian consortiums Suncor and Syncrude, have been in operation since the 1960s and 1970s.

Shell’s multibillion dollar project is the most modern operation of tar sands mining. Since 2003, after a long planning and construction phase that cost about $5.5 billion, oil is being produced from the mine, currently at a rate of 155,000 barrels per day (one barrel contains 159 liters).

It is an operation of staggering scale. For each barrel of oil, two tonnes of ore is dug up; each dump truck contains 400 tonnes, or ore for 200 barrels. In winter, when temperatures can drop to minus 40 degrees Celsius, the excavation equipment becomes so brittle that teeth of the excavators frequently break off.

“Shell has a strong position in the oil sands,” says Terry Peters, an energy analyst at Canaccord Capital in Toronto. “Shell already has an operational project, where a mine and a processing facility have been developed successfully. They can now build on that step by step. I think that the parent company considers its position in the tar sands through Shell Canada as an excellent, stable source of crude for the long term.”

Because Shell got into the game early, Shell has a head start over many other oil companies that now also want to get into the tar sands. They are facing enormous costs to get started. Oil companies from Canada and abroad are engaged in an international run on the oil sands, with about $100 billion in planned investments.

“Everyone wants a part of the tar sands,” says Todd Hirsch, an economist with the Canada West Foundation in Calgary. “In recent years, the tar sands have reached a turning point, from a marginal technology of the future to the reality of today. Oil extraction from the tar sands is no longer something on the horizon. It’s here and now, and if you’re not in it as an oil company, you are running behind.”

In addition to their large size, the tar sands offer other important advantages to oil companies. For one thing, there are no exploration costs involved – unlike conventional oil, where part of the proceeds have to be spent on finding new reserves.

“If you’re not in it as an oil company, you are running behind”

Moreover, the tar sands are located in a pleasantly stable country with a predictable tax regime and direct access to the largest market for oil, the United States.

But there are also considerable drawbacks to the tar sands, which for a long time have stood in the way of their exploitation. Although the presence of the tar sands has been known for centuries, the challenge has always been to separate the viscous bitumen as efficiently as possible from the sand. For decades, pioneers Suncor and Syncrude developed and refined the production process, whereby sand is effectively washed from the tar in giant, industrial laundry machines, using warm water and caustic soda.

For that process, a lot of dirt has to be moved and a lot of water has to be heated, which costs lots of energy and cash – about $18 to $22 (U.S.) per barrel, compared to the mere dollars it takes to drill oil from a well in Saudi Arabia.

That was an obstacle when a barrel of oil sold for less than $20, but with oil prices around $75 per barrel as they are now, relatively high production costs are no longer the main hurdle. Considering the growing global demand for energy, especially from China, and the limits on conventional sources of oil, it is widely assumed that the exploitation of the tar sands is now permanently profitable.

Challenges are now more of a logistical nature. Oil companies are lining up to develop projects in a remote part of Canada where temperatures range from 40 degrees Celsius in summer to minus 40 in winter. Manpower, construction equipment and materials are difficult to come by, wages and prices are wildly inflated. Fort McMurray, the nearest town in northern Alberta, is growing rapidly and is facing an acute housing shortage.

“The Alberta economy is overheated,” said Martin Molyneaux, an oil analyst at FirstEnergy Capital in Calgary. “There is a great shortage of manpower, and the competition for engineers, construction workers and other employees is very intense.”

Another major concern is the environment. Oil extraction from the tar sands is a relatively dirty way of oil production. The tar sands industry is the fastest-growing source of greenhouse gas emissions in Canada, with an output three times as high as conventional oil production, says Marlo Raynolds, executive director of the Pembina Institute, an environmental organization in Calgary.

Moreover, it takes large quantities of natural gas, a relatively clean form of energy, to produce bitumen, a much dirtier fuel. Raynolds compares it to converting gold into lead. “It is wasteful use a fuel of such high quality to make one of much lower quality.”

The main driver for the heady growth is the fact that there is not enough cheap oil left in the world, says Hirsch. “The kind of oil like in Saudi-Arabia, where you stick a pipe in the ground and it flows to the surface, is running out. There is plenty of oil left on earth, but we have to work harder and dig deeper to get it. We have to wash it from sand, as we do here.” 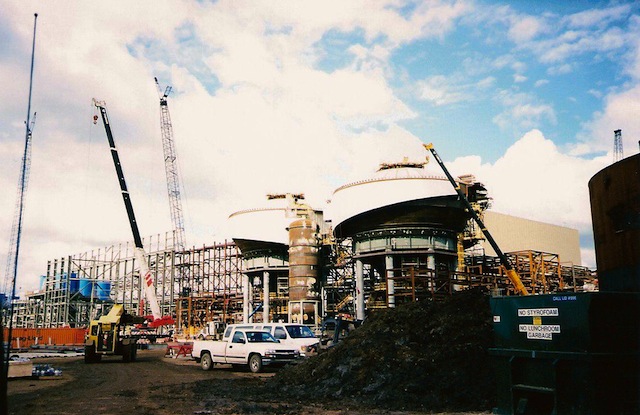 Shell Canada CEO Clive Mather: ‘Soon, it will be normal’

The Alberta tar sands are an enormous growth opportunity for energy giant Shell, says Shell Canada CEO Clive Mather. The Canadian company, in which Royal Dutch Shell has a 78 per cent stake, wants to make additional investments of billions of dollars to increase its production of tar sands oil from a current level 155,000 barrels per day to 550,000 barrels per day in 10 years. Shell recently decided to shore up investments in the tar sands from $5.5 billion to between $10 and $13 billion over the next four years.

According to Mather, the plans are the result of the new reality in oil, characterized by persistently high prices, strong demand and a shortage of manpower and equipment to quickly bring non-conventional sources online. Building production facilities in the tar sands “requires much more capital than we’re used to in conventional oil production, but that’s the way things are in the world right now.”

Alternative sources of crude in Russia, South America, Nigeria, Iraq and Iran all present geopolitical risks. “By comparison, Alberta, which until recently was not really seen as a top destination for investment, now is high on the list.”

The level of priority Shell is attaching to its presence in the tar sands has not always been as evident as it appears today. The decision to build a mine was taken in 1988, when the price of oil was still far below the cost of production per barrel in the tar sands (estimated at $20 to $25 per barrel at Shell’s operation).

“It was a smart move with a very happy ending”

Shell went ahead because it faced losing its lease on the territory in northern Alberta, which it has held since 1956, if it didn’t do anything with it. To hedge against the economic risks of a huge investment in the oil sands, Shell made a bet on a 60 per cent stake in the Athabasca Oil Sands Project.

“It was a courageous decision,” said Mather, who has been at the helm of Shell Canada for two years and was not personally involved at the time. “I can now at an oil price of $70 per barrel reap the benefits of that investment, but at the time it was a difficult decision.

“We saw the underlying potential of the reserve and believed that global demand for oil would grow and that prices would rise to a level where this is economically viable. But I do not think that anybody seriously thought that oil prices would reach $75; we would have been happy with $25. In retrospect, it was a smart move with a very happy ending.”

Some energy majors, such as British Petroleum (BP), still see the oil sands as madness. But Mather predicts a growing role for the tar sands in global energy supplies, “without a doubt”.

“Over the next 10, 20, 30 years, the demand for oil will continue to increase, and so will the price. That makes it possible to exploit more expensive reserves in a profitable way. The market is doing its job. The tar sands were hardly developed 20 years ago, because there was no economic incentive for it. Now, there is.

“Today we’re looking at the tar sands as perhaps non-conventional, but within a few years we will begin to see them as normal. Especially if we are incapable of finding new supplies of conventional oil.”

In Banff, a highway cuts bear habitat in half War in Afghanistan is “wrong mission for Canada”
Share