Full of anticipation, about 30 immigrants sit in the first few rows of chairs in the gymnasium of an elementary school in Hamilton, Ontario. It is a diverse group, with people from 22 different countries, including China, India, Afghanistan, Mexico, Syria and the Philippines. They are about to become Canadian citizens.

Some have dressed up for the occasion. Most, however, are in casual wear. They have already received a small Canadian flag, and a card with the lyrics to the anthem, O Canada. When they leave this room, they will be Canadians, naturalized during a citizenship ceremony.

“It’s a special occasion to get citizenship,” says Tariq Al-Sharif, a student from Jordan who came to Canada five years ago from Kuwait. “Canada is a peaceful country with respect for human rights, where your voice is heard. These are all important privileges.”

Al-Sharif has recently passed a test with questions about those principles and some Canadian history. He answered 18 of the 20 questions correctly. “It was not too hard.” 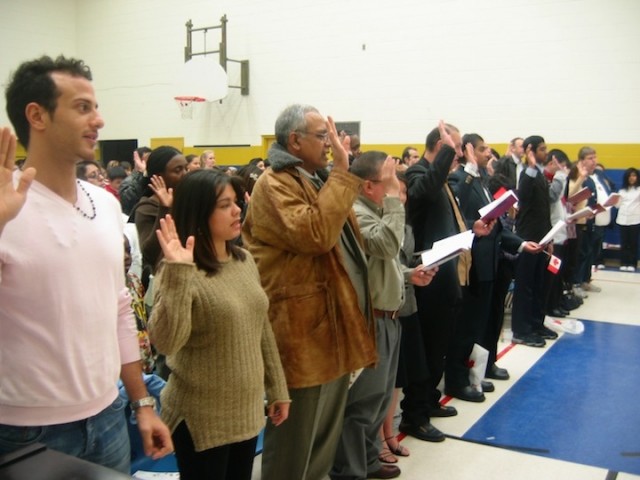 Participants in a citizenship ceremony in Hamilton take the oath.

Across Canada, nearly 3,000 citizenship ceremonies are held each year. The country of 30 million people accepts about 250,000 newcomers annually, without major problems. They are encouraged to apply for citizenship. About 160,000 do so every year.

During the ceremony, new Canadians are officially welcomed as full citizens and reminded of the basic values of Canadian society. Ceremonies have been held since 1947, the year in which Canadian citizenship was created (before that time, residents of Canada were British nationals).

Typically, citizenship ceremonies are held at a local immigration office, but they can also be organized in other places, such as schools. “It brings it home to other people as well,” says Allen Rodgers, an officer of the Royal Canadian Mounted Police, the Mounties, who will stand guard during the ceremony.

About 200 school children are present today. “The children learn about citizenship, immigration and Canadian history. They greet people as they arrive and learn to welcome them.”

“We are welcoming new citizens into the Canadian family”

All rise! someone suddenly proclaims. The citizenship judge enters the room. He is not a real judge, but a member of the Order of Canada. In this instance, the judge is Robert Marrow, a former mayor of Hamilton. He takes a seat behind a table at the front of the room, flanked by Rodgers in his scarlet Mountie tunic, a portrait of Queen Elizabeth II, the Canadian flag, and two clerks.

Morrow gives an informal talk about the rights and responsibilities associated with Canadian citizenship. “We live in one of the freest countries in the world,” he says in a casual tone. “Equality of everyone is enshrined in law and goes above all else. To be a good Canadian citizen, it is important to obey the law, participate in society, do volunteer work, help others, or take action when something happens that you don’t agree with. It is your responsibility to vote.”

He also strikes a note of welcome. “We are welcoming new citizens into the Canadian family. All Canadians will be richer for your presence in our country. Everyone has taken a different route to get here, but you have all chosen Canada. I would like to thank you for that choice. We wish you all the best as citizens of this country.” 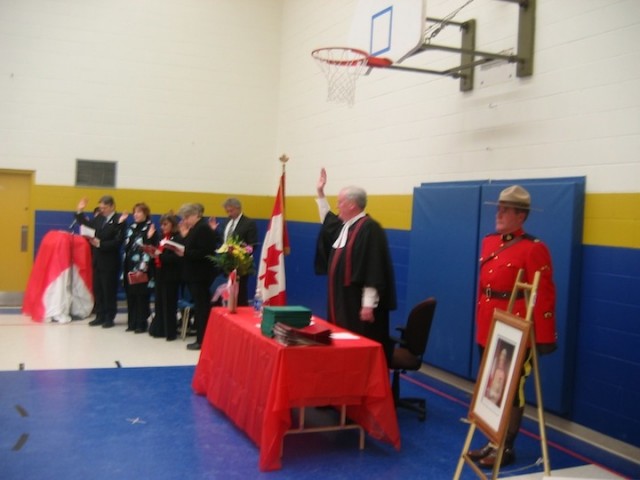 Citizenship judge Robert Morrow at the front of the room during a citizenship ceremony.

Then it’s time for the oath. Everyone stands, holds up their right hand and vows allegiance to the Queen, first in English, then in mumbled French. “You are now Canadian citizens,” says Morrow. “Congratulations.” There are cheers and applause. Then, one by one, the candidates are called to receive their certificate, and to shake hands with the citizenship judge, the Mountie, and the clerk. Some have their picture taken with them.

A choir of school children sings a song about Canada, followed by short speeches by several guests, including an immigrant who came to Hamilton from the Caribbean 30 years ago. “Canada aspires to be a peaceful society where everyone belongs,” he says. “I would like to invite you to make your contribution to the building of a strong, dynamic society.”

Finally, the anthem is sung: O Canada, we stand on guard for thee!

Is that ‘eerily nationalistic’, as critics of the naturalization ceremony in the Netherlands have said? It’s not that bad, in a school gymnasium where the citizenship judge sits under a basketball hoop and school children offer homemade cookies and fruit punch to the new Canadians. Many of them stand around chatting following the ceremony, their certificates and winter coats in hand.

“It’s a great feeling to be Canadian now”

“It’s a special occasion,” beams Francisco da Silva, an immigrant from Angola who just became a Canadian, along with his wife and two small sons. “I want to be a free man and provide for my family,” he says. Da Silva fled Angola to escape military service. He has lived in Canada since 2000 and works as an accountant. “Here we can work and study. The people are good to us, I feel welcome.”

“I’m very happy,” says Victor Reina from Guatemala, who came to Canada 15 years ago as a refugee, and works as a forklift operator. “The ceremony was beautiful with the school children present. It’s a great feeling to be Canadian now. Canada is a peaceful country, the people are friendly. I want to stay here forever.”

“I am proud and happy to be in Canada,” says Tatiana Kozlova from Russia, a biologist who immigrated four years ago. “The principles of this country appeal to me very much. Canada is a country of people from many cultures, who can maintain their traditions and their links with the mother country. I intend to work hard to make a contribution to Canadian society. This is a special day for me.”

RIM plant keeps churning out BlackBerrys In Banff, a highway cuts bear habitat in half
Share