Dressed in headscarves and winter boots, Fatmah Elsamnah and her daughter Maha make their way along a snowy boulevard in downtown Toronto. They’ve appeared from a subway station, quite slowly because 66-year-old Elsamnah walks with difficulty. They are accompanied by Maha’s son, Abdurahman Khadr, a burly, soft-spoken man in his 20s who has described his relatives as “the Canadian Al-Qaeda family”.

They are on their way to the courthouse, where Abdurahman’s older brother Abdullah is scheduled to appear for a bail hearing. Abdullah Khadr was arrested in Toronto this month on suspicion of arms trading on behalf of Al-Qaeda in Afghanistan. The United States has requested his extradition. If he is found guilty in the U.S. of purchasing $20,000 worth of bullets, grenades and explosives for the terrorist organization, he could face life imprisonment. 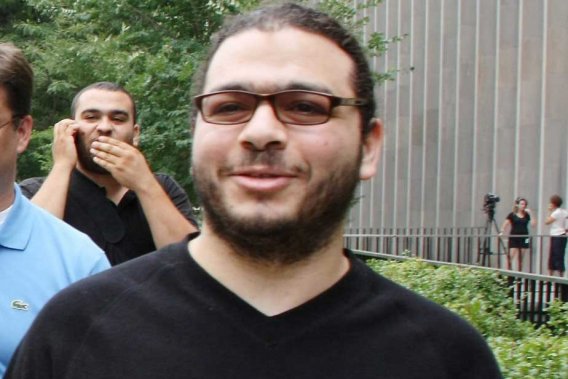 Abdullah Khadr, with his younger brother Abdurahman in the background (photo Canadian Press).

In the courtroom, Abdullah looks back from the dock, smiling at his mother and grandmother through the glass. Maha, an Egyptian-Canadian, buries her face in her hands and sobs. Until recently, her family was part of the Al-Qaeda leadership in Afghanistan and Pakistan. Their lives were devoted to jihad, family members have acknowledged.

Maha’s husband, Ahmed Said Khadr, was a highly placed financier of the organization. Abdurahman has told the Canadian Broadcasting Corporation that his family was close to Osama bin Laden and lived with him at his compound in Jalalabad before the terrorist attacks of September 11, 2001.

But times have changed for the Khadr clan. Ahmed Said was killed more than two years ago in a firefight with Pakistani troops in the border area of Pakistan and Afghanistan. His youngest son, 16-year-old Karim, was paralyzed in that battle; he is being treated in Canada and lives with his mother in Toronto. 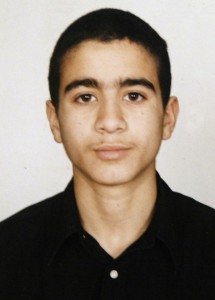 Omar Khadr as a child, before he was detained at Guantanamo Bay (family photo).

Another son, 19-year-old Omar, has been detained at the American prison at Guantanamo Bay, Cuba, since January 2002. He has been accused of throwing a grenade that killed a U.S. army medic in Afghanistan when he was 15. Abdurahman, 23, says he was also held at Guantanamo Bay, but he has been released.

Now the oldest son, 24-year-old Abdullah, is in custody. He has allegedly led an Al-Qaeda training camp with his sister, 26-year-old Zaynab.

Elsamnah is trying to save her offspring. The grandmother, a Palestinian by birth who immigrated to Canada 31 years ago, did not join her relatives when they moved to Pakistan. But whenever one of her grandchildren is in trouble, she comes to their aid. Two years ago, she helped Abdurahman to come back. Now, she has offered to put up her home in Scarborough, a Toronto suburb with a large Muslim population, as bail to get Abdullah released pending his extradition case.

It’s a tall order, because according to the U.S. Abdullah Khadr has admitted that he was involved in the terrorist organization. Earlier this year, he was detained by the Pakistani authorities and interrogated by the FBI. He told them he had bought weapons on behalf of his father, Ahmed Said Khadr, an associate of bin Laden, according to a statement by the Justice Department in Washington. Abdullah, who returned to Canada this month after spending years in Pakistan and Afghanistan, says he was physically abused during his 14-month detention in Pakistan.

“I don’t believe in blowing myself up killing innocent people”

Grandmother Elsamnah is oblivious to the accusations against Abdullah. “I read it in the newspaper, but I did not believe it,” she says during cross-examination by a Canadian Crown attorney. “He never said anything about it to me. Politics is not my concern, I don’t get involved. He respects me, he loves me and he would never do anything to hurt me.”

The Crown manages to expose an inconsistency in her answer to the question when she first heard that her grandson was involved with Al-Qaeda. Was that really only last week, as she just said? She makes a grimace, a tick distorts her face.

A problem for the Khadr family is that their story has become widely known. Last year, the family history was revealed in a documentary on CBC television. Abdurahman Khadr, the second son, was its main source. He described himself as “the black sheep of the family”, who resisted his father’s wishes that he should become a suicide bomber. From age 11, he was sent to training camps to learn about shooting and making explosives. But, he said, “I don’t believe in blowing myself up killing innocent people.” 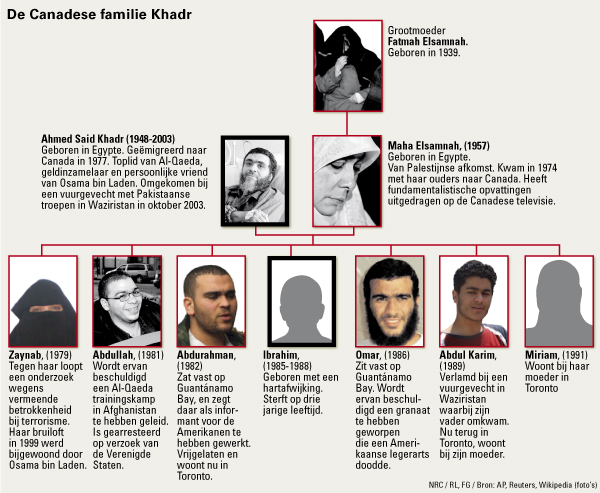 Other members of the family also spoke publicly about their lives within Al-Qaeda. Mother Maha and her eldest daughter Zaynab appeared on camera in Pakistan to defend the actions of Ahmed Said and Omar Khadr. Abdullah was also interviewed; he only wanted to appear in silhouette. He called Osama bin Laden “a saint” and “a very peaceful man” and expressed his admiration for the September 11 attacks on the U.S. “Dying for Islam is [the] hope for every Muslim,” he said. “Every Muslim’s dream [is] of being a Shaheed to Islam” (a martyr).

Such media statements have hurt the Khadr family, it turns out at the bail hearing. “There is no surety possible for someone who is willing to die for his cause,” argues Crown attorney Robin Parker, referring to Abdullah’s statements on TV. She describes Khadr’s ties with Canada, which is accused by some of being lax in the fight against terrorism, as a “connection of convenience”. “He thought he would be beyond the reach of American authorities here.”

“Serious countries take care of their own problems”

Some wonder why Khadr is not prosecuted in Canada. The allegations against him are crimes in Canada as well; Canadian troops are part of the coalition force in Afghanistan fighting Al-Qaeda, and Canadian police investigated the alleged terrorist connections of Abdullah and Zaynab. “Serious countries take care of their own problems,” wrote a columnist in the Toronto Star. 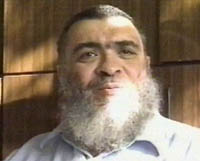 Perhaps the Canadian government wants to give the Khadrs as little attention as possible because it has already been embarrassed by them in the past. In 1996, then Prime Minister Jean Chrétien made a personal appeal to Benazir Bhutto, then Prime Minister of Pakistan, to release Ahmed Said Khadr from a Pakistani jail. The request was granted, and Ahmed Said resumed his operations in Jalalabad – ostensibly chartable work for Afghan orphans. In government circles in Ottawa, the episode became known as ‘the Khadr effect’: an unfortunate intervention in support of someone who later turns out to be a senior terrorist.

Judge Anne Molloy is unwilling to release Abdullah Khadr on bail. “This is not a person I would trust to abide by restrictions imposed on his release,” she rules. “There is evidence that Mr. Khadr has high-level links to Al-Qaeda. That organization could well assist him in getting to a place beyond the reach of U.S. authorities. There is a real flight risk.”

Abdullah, who has been sitting motionlessly with a copy of the Koran in his hands, is handcuffed and led away. His brother, mother and grandmother walk back to the subway, surrounded by media. They don’t speak. Abdullah is due back in court in January for the start of his extradition trial.