In parts of Canada, Muslims can resolve disputes according to Sharia, Islamic law. According to Adrienne Clarkson, acting head of state of the country, Europe tends to be too tense in dealing with immigrants. “We understand what it’s like to be a loser.”

In Canada, immigrants are still welcome. Canada is the only country in the western world where a majority of the population (79 per cent) views the arrival of immigrants as positive, a recent comparative opinion survey showed. Seemingly free of major problems, the country absorbs 230,000 to 250,000 newcomers annually, within a total population of 30 million. The majority comes from countries in Asia and the Middle-East. Canada’s aging population and a low birth rate means it needs immigrants to help its population grow.

Adrienne Clarkson is both the spokesperson and personification of the Canadian Dream. As Governor-General, she fulfills the daily duties as head of state when Queen Elizabeth II is not in the country. As a person, her life history embodies the Canadian reality.

Clarkson’s family came from China, via stops in Australia, Surinam, and Hong Kong. From Hong Kong, the now-65-year-old Clarkson, nee Poy, fled from the Japanese with her parents to Canada, where they found safe haven. They arrived onboard a Red Cross ship, with a single suitcase of possessions per person.

Today, Clarkson, a former journalist with the Canadian Broadcasting Corporation, holds office at Rideau Hall, a mansion in the capital Ottawa, in the same part of town where princess Juliana stayed during World War II. From her office, she looks out over a sunny garden.

“Canada is a fundamentally egalitarian society that comes from being poor,” she says. “Complete deprivation and loss of everything is one of the themes of Canadian life. Everybody is only about two or three generations removed from some kind of deprivation. I think that is what makes us a people who is able to understand, even if we never state it, what it is to be a loser, what it is to be somebody who is down on their luck. Because that’s the story of all the people who have come here.” 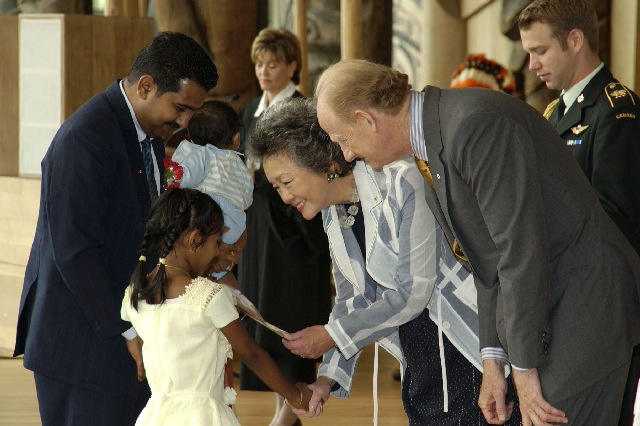 A crucial element of the Canadian immigration model is a complete acceptance of newcomers, says Clarkson. People are not stuck in immigrant limbo, she says, but are invited to join society as full citizens. “Our politicians have been saying for over 100 years: if you come to Canada, you will become a Canadian. No matter where you come from, you will become a Canadian. This is where you run into difficulty in Europe, I think, and I want to be delicate about this, is that so much of citizenship is based on blood. You must be this by blood in order to be a citizen. It’s a very odd concept for us in Canada.”

On Canada Day, the national holiday, Clarkson recently led a citizenship ceremony for immigrants in Ottawa. There were 50 people from 29 different countries. “I would say maybe only 10 per cent came from countries that are considered white.”

“That’s not the way we do things here”

According to Clarkson, Canadian citizenship is tied irrevocably to a few basic principles, such as parliamentary democracy, official bilingualism, accessible health care and public education. Those values must be promoted, she says. “We have to be able to care about our own values, so that we’re able to state to people who behave in such a manner that you know they haven’t really heard the message, that you can very self-confidently and not punitively say: well that’s not the way we do things here in Canada.” So when an imam criticizes homosexuals, don’t hit back by calling islam a backward religion. “You don’t have to say that, this is the thing,” she says. Citizens have to obey the laws of the land, and promoting hatred is forbidden. “When someone goes too far, you just charge the person under the right law.”

For most immigrants, that’s an acceptable principle, says Clarkson — provided the law is equal for all. There should not be laws that are, explicitly or implicitly, aimed at a specific group. When she lived in France for five years as cultural attache, she was surprised by the discussion about a special law to prohibit female circumcision. “You don’t have to have a separate law if you have a law that is against wounding, mutilating, or sexually assaulting somebody. You don’t single them out and say: if you mutilate somebody around their left ankle and you’re a muslim, then this law is against you.”

The fact that western countries do tend to take that approach has to do with “irrationality and ignorance,” Clarkson says. “People talk about extremists, but there are extremists in every religion. And what I think happens is that we can censor a lot of the stuff that is extreme in the religion that we know the best. But we don’t know how to do that for something like Islam, because we don’t even know the basics of it, so we can’t tell when somebody’s being extreme.”

Canada has managed to avoid excessive recriminations against the roughly 600.000 muslims among its citizens since the attacks of September 11, 2001. Like other countries, Canada arrested a number of individuals suspected of terrorist activities. But the most notorious case, of a Syrian Canadian who was held in a prison in Syria, led to a public inquiry into whether Canada has violated his human rights. Insofar as there is any discussion, it is not about fear of islam. Earlier this year, muslims in Ontario acquired the right to have their civil disputes arbitrated according to the principle of sharia, islamic law. Although the initiative is not uncontroversial and is being rejected by some as an example of multiculturalism gone too far, big conflicts have not developed.

“Canada is a fundamentally egalitarian society”

The key to successful integration, says Clarkson, is public, mixed education. According to Statistics Canada, 95 per cent of Canadian children go to public schools. Canada differs in that respect from the United States, where the elites send their kids to private insitutions, where they don’t mix with children from different backgrounds.

Clarkson is convinced that if given a chance, immigrants generally want to integrate — unlike what is sometimes assumed. “Sometimes I think people who have not come from different ethnic groups or different kinds of background in the world think: oh, if you are a Gronk, and you come from Gronkonia, you will always want to be with other Gronks. And you will want to eat Gronk food. But that’s not necessarily true. There is a large percentage of people who do not want that. The only reason they retreat into ghettoes is if they are not given full place in the society of which they should become members.”

That doesn’t mean that the ties with the own community need to be erased. After each match in soccer’s world cup, another ethnic group — Portuguese, Greeks — celebrates in the streets of Canadian cities. Later generations identify to a lesser extent with their ethnic background, says Clarkson, and they often drop the hyphen in their nationality (Italian-Canadian, Chinese-Canadian, Pakistani-Canadian, Polish-Canadian). In the census, an ever-growing proportion of the Canadian population, asked for their ethnic background, identifies themselves simply as ‘Canadian.’ Sociologists have argued that Canada is engaged in forming a new ethnicity: Canadian, a nationality that, less than any other in the world, is associated with a specific race.

Clarkson’s own family is a case in point. “I have two daughters and they are half Chinese, a quarter Jewish and a quarter Scottish,” she says. “They married, and now I have grandchildren who are 1/4 Chinese, 1/8 Jewish, 1/2 Scottish and one of them is 1/4 Slovakian. Then the generation of my grandchildren, I don’t know what it will be, it will be anything.”

Canada’s multicultural smorgasbord ‘My country is turning me into a killer’: U.S. Army deserters in Toronto
Share